When I first arrived in Krakow, Poland, for my semester abroad in February 2008, I was just getting back into running after a three-year hiatus. I’d spent that January staying with a friend in her London flat and traveling some around Britain and Europe before my program in Poland started. As my bank account had dwindled over the month, I forced myself to put aside my passport and suitcase for the last week I was in London and decided to try to find cheaper ways to entertain myself (Hey! That’s the name of the site!). Running along the Thames was cheap (free!) and I got to see more of London than if I were walking, so I decided to lace up my shoes again.

At that point, running for me, after having taken so much time off, was a ridiculous effort: I’d lope along at a 10-minute mile pace for five to seven minutes, before giving myself a few minutes’ walking break to try to get my heart rate down below 150 again.

“I’ll ease into it,” I told myself, as I’d drag my body back into my friend’s flat, my cheeks siren red from my efforts.

And so I was still, a week later, during my program’s orientation to Krakow. 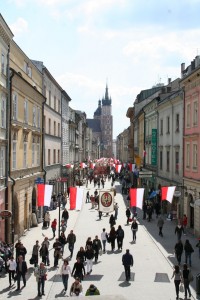 A brief history lesson: Krakow is one of the few Polish cities that wasn’t badly damaged during World War II. While Hitler’s army annihilated 98% of Warsaw’s buildings, the Fuhrer decided Krakow, as a city, was not of Slavic origin, and could therefore be spared. His reasoning was that the city had been under the Austrian Empire after the Partitions of Poland in 1795 (until 1918, when Poland was briefly put back on the map as a republic, before being taken over by the Germans during WWII). Even though the city has roots leading back to 966 C.E., it was really a Germanic city, through and through, Hitler decided.

Satisfied with this version of history, Hitler quickly named Krakow the capital of his Nazi Polish government.

He went on to install his new Nazi governor in Wawel Castle, a gorgeous fortress atop a hill in the center of Krakow that’s believed to be the birthplace of Poland, and a huge point of pride for Poles.

Wawel Castle (from below)

What all this history meant, for this 21st century American foreign student, was that Krakow’s Old Town, despite—and also because of—the city’s troubled history, still retains its feel from centuries ago. Each cobble-stoned street is lined with pastel-colored Baroque buildings. They all lead up to the Rynek Glowny, the largest market square in Europe, where the 15th century sunshine yellow Cloth Hall sits at its center and is home to a flower and handicrafts market that operates year-round.

My study abroad program’s guide, Anna (pronounced AHN-ya) spent the morning of my first full day in Krakow showing us around Rynek Glowny and Krakow’s Old Town. She pointed out St. Mary’s Cathedral, with its mismatched towers (so designed, or so the story goes, by two rival brother architects, one of whom killed himself in shame when his tower was shorter and less beautiful than his brother’s), and directed our attention to the Clock Tower, the only remnant of Krakow’s 14th century Town Hall. 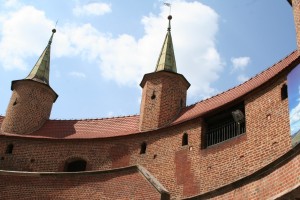 Then, she ushered us out of the square. A few blocks’ walk and we’d reached the Barbican, a circular brick fortress with an imposing portcullis.

“This,” said Anna, “Is the only remnant of Krakow’s city wall. The wall used to surround the whole city, but the Austrians tore all of it down in the 1800s.”

She shifted on her feet. 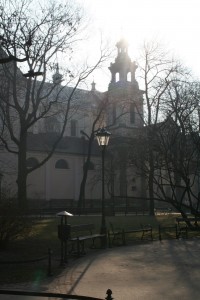 “They replaced it with what we call ‘The Planty.’” She motioned around her, to what I’d thought was a small, narrow park.

“The Planty,” Anna continued, “Goes around all of Krakow’s Old Town, forming a green ring around the city with a path running through it.”

I looked around more. The Planty (pronounced PLAHN-tee) was lovely, even in the early February chill. It was made up of one large pathway, and several smaller ones, all of which were lined with trees and benches. A few bundled up Poles sat along the path, reading newspapers or talking in their phones. Others were walking along it, but I didn’t see anyone running. Still…

“How long is the whole thing?” I asked Anna, very aware of the fact that I’d had to stop and walk barely 3/4s of a mile into my run the previous evening.

“Do you have a guess?” I persisted.

So now I had a goal for myself: I’d run from my dorm a mile or so out of the city center, run the whole Planty and then run—…or maybe walk, to, erm, cool down—back.

With that goal in mind, I spent the next handful of weeks working toward it, running around a huge park near my dormitory. I dodged Rottweilers and Dobermans (the Poles seemed obsessed with muscle dogs). I trotted past bronze statues of Pope John Paul II and Marie Curie, both cherished nationals. I wove through bummed soccer fans after a tough loss at a nearby arena. And on nearly every run I got heckled by the usual suspects—teenagers and construction workers—and gawked at by just about everybody. It turns out no sane person runs in Poland, least of all the way I was doing it: red-faced and puffing ten minutes in.

Spring arrived. I’d worked my way up in mileage and decided one sunny Saturday morning that today was my day to tackle the Planty. I stretched out in my dorm room and bid my roommate farewell (She, too, thought I was a bit nuts, but later admitted that she respected me for my fearlessness to wear skintight, not-hiding-anything running tights, especially in the most Catholic—and therefore fairly conservative—country in the world).

I made it to the Planty without issue and turned onto the trail. With the warmer weather, the trees lining the path had leafed out. The whole trail was green and blooming. It was lovely. And crowded. Krakowians were out en masse enjoying the weather, and I found myself dodging more than the occasional Doberman in order to make my way. 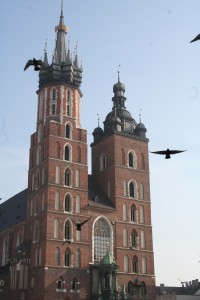 Still, the run was going smoothly, all in all. In fact, I was making really good time. To my left was the Catholic church I’d peeked into the week before, and oh—rounding the next turn—there was the English bookstore where I’d swap paperbacks, and there was that restaurant that serves great peroigi and…

I glanced at my stopwatch. Wait a second. I was making really, really good time. I’d been running on the path for maybe twelve minutes and was, as far as I could tell, already one-third of the way around the city center.

“That can’t be right,” I thought. “I must be forgetting something.”

But before I could ponder it more, I rounded another curve, this time right near the base of the Wawel Castle, and nearly took out a five-year old girl with her father. Coming up short, I realized I’d run right into what looked to be a spring carnival, being held along the banks of the Vistula River.

I was forced to slow to a walk for a moment, trying to get my bearings. There were children and their parents everywhere, all up and down the sidewalk. Popcorn and cotton candy vendors were out hocking their wares. Teenagers were lobbing softballs at milk bottles to win their sweethearts giant stuffed animals.

The popcorn smelled delicious. And—oh! Were those mini-donuts?

I had to get outta there, and quickly, before my resolve to run the Planty faded away. But I was stuck. The street fair looked like it went on for a ways. I couldn’t turn off on a side street without giving up on my goal. Plus, there weren’t any around anyway. I was pinned between the riverbanks to my left and the hill with the Wawel Castle atop it rising up beside me on my right.

I didn’t have a choice: In order to make it around the Planty, I was going to have to run through the whole carnival, Spandex pants and all.

There might have been some pointing. Perhaps some laughter. I know for certain there were mouths that fell open, many gaping at my pants, my face—which was flushed its usual deep red, as it always is when I run—and most of all, my stride.

“What is that girl doing?” they asked each other in Polish.

Eventually, after I nearly ran into a cotton candy salesman and had to duck around three or four enormous dragon stuffed animals, I made it to the other side.

There, I realized I was now halfway around the city center—so two and a half miles around, in theory—and it had only taken me fifteen minutes. I was getting in better shape, sure, but I wasn’t that good. I started to think that maybe Anna was a bit misinformed. And that maybe when I’d told one of my Polish teachers about my goal and her eyes had gotten huge, that maybe she, too, had bought into the whole “The Planty is very big” mantra.

And then I really started to think that maybe I would need to do my long run the next day.

Ten minutes later, and I’d made it. I’d run around the entire Planty, the whole thing, all “five miles” of it, in less than thirty minutes. And I have to say: Those five miles were the quickest, most popcorn- and cotton candy-filled miles I have ever run. Goal accomplished.

To date, EntertainingYourself.com has had visitors from over 100 countries on 6 continents around the world (still nobody from Antarctica – but hope springs eternal). We LOVE it and WELCOME all of you! Thanks for stopping by and ENTERTAINING YOURSELF with us.
TIED FOR SECOND PLACE – RUNNING IN PRAGUE