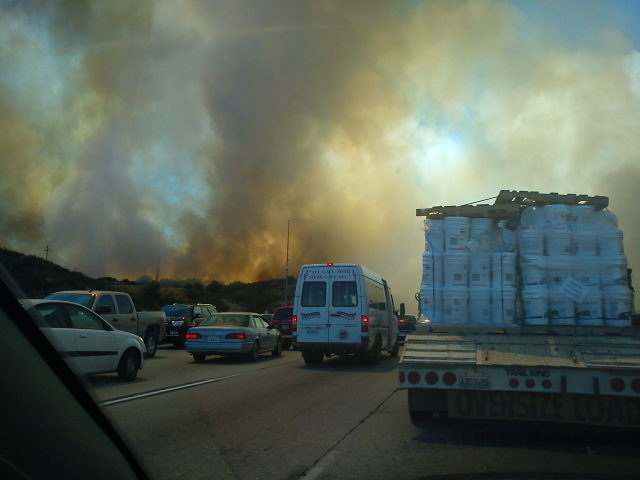 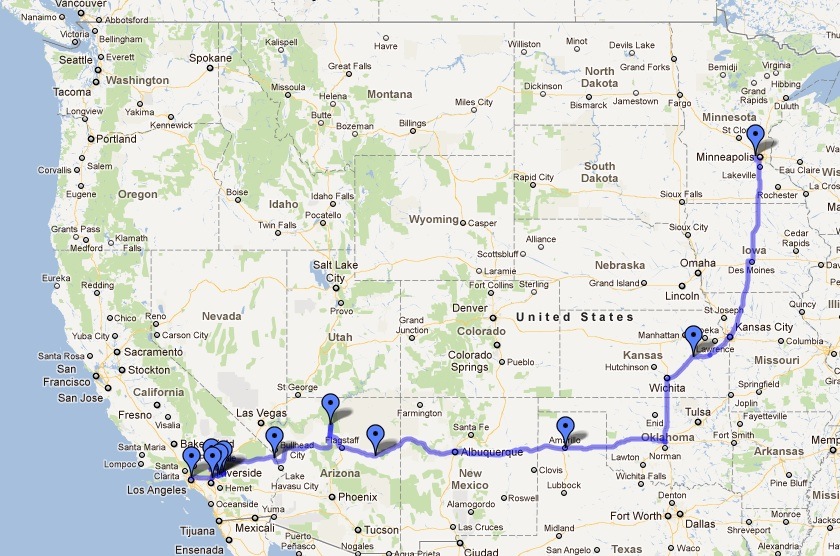 …continuing on our journey out of  the Grand Canyon…we crossed the border into California just as the sun set. 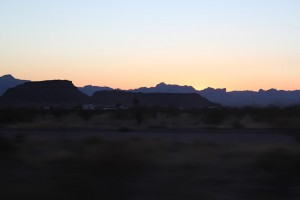 The next day dawned bright and clear as I stepped out into the parking lot for my first view of California in the daylight. 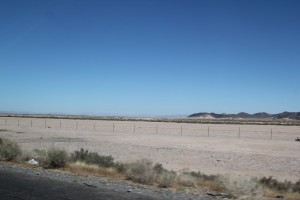 There was desert. Everywhere. Palm trees, desert, and—there she was—the good old Ford Focus with the trusty U-haul trailer still attached. We packed up our bags and hit the road for our final day in the car.

At about 1 o’clock that afternoon, Chris and I pulled off for what was to be our final gas stop. He’d driven the whole morning, in preparation for our last few hours, when I would take the wheel in order to brave the big bad Los Angeles freeway system with a slow-moving trailer. 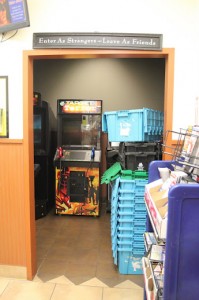 The saddest room in a gas station in CA

We fueled up, and then I swung into the driver’s seat and pulled out onto I-45.  About 45 minutes later we started to see smoke. As we got closer, we began making guesses at what it could be.  A house? Eh, who could say; it was too far away to tell. Bored, Chris went back to his book and I fiddled with the radio. 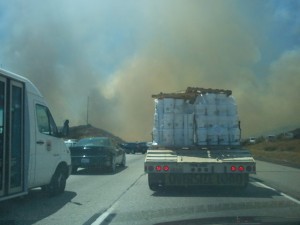 Then we hit traffic. Now, according to my handy-dandy smartphone (that I made Chris check, responsible driver that I am) we were about an hour, hour and a half outside of L.A., and part of me (the scared, “What if I hate this city? Can I actually do this?” part of me) was afraid that this was the edge of the fabled Los Angeles traffic. What if we were in this for the next couple hours? What if, for the rest of my existence, I find myself sitting in bumper-to-bumper traffic? What if–Alright, alright, calm down, it’s stop-and-go, at least we’re moving.

And then we stopped moving entirely. The smoke was right near us now, billowing in big brown plumes.  Hauling that trailer, we were in the far right lane, the truck and trailer lane, and we weren’t moving at all. Suddenly, we heard sirens. Out my side mirror I saw them: fire truck upon fire truck upon fire truck, racing past us on the shoulder. There were your standard red engines, but also larger ones, with “Wildfire Control” printed on the side.

He looked up from his book.

“I think this fire is sort of big.”

Back down to the page. 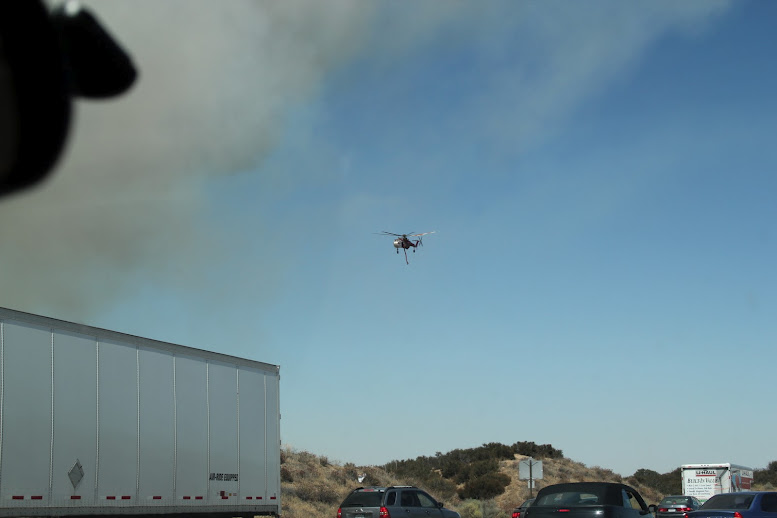 We still weren’t moving. The smoke was getting thicker and thicker. While it had started on the right of the car, suddenly there was smoke billowing on both sides. I looked around. On the opposite side of the highway, four lanes across, cars were starting to turn around, using the shoulder to drive the wrong way down the freeway, away from the fire. 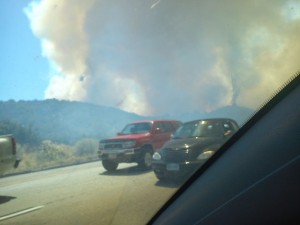 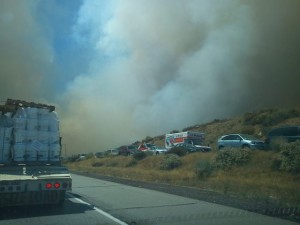 He finally looked up from his book. To our right was an entrance ramp. We looked to see cars driving the wrong way up the ramp, fleeing the flames ahead of us. There was a huge semi in front of us; our view was blocked from how close we were to the fire and then suddenly: to our left, it breached the hill.

We watched in horror as a shed not a half a mile away from us was consumed by flames in milliseconds. The fire enveloped a flagpole and burned through an American flag as fast as we registered what it was doing.

I struggled not to panic. The flames were close, much closer than anyone would like, but I couldn’t see any fire trucks nearby… I kept looking for a cop or a firefighter or some kind of authority figure to tell us what to do and where to go. But there was no one. Everyone was too busy fighting the fire, and no one was there thinking about the bystanders just trying to get out of the way. No one.

I inched forward, very aware that I had not been at all trained in the art of backing up a car with a trailer attached. I heard my dad’s voice ringing through my head: “You could jackknife that thing, easy. Just make sure you never get into a situation where you need to back it up. Just always pull through.” The truck in front of us wasn’t moving and there was at least a truck’s length in front of it. In fact, the truck in front of us wasn’t even running.

“Oh my god,” I said, as it dawned on me. “The trucker—he abandoned his truck! He just abandoned it. He’s not there anymore! He just left! He left it!”

I couldn’t stop talking. Chris was stunned. In my rising panic, I briefly toyed with the idea of doing the same thing as the trucker, leaving all of my prized and not-so-prized possessions in the car to be consumed by the flames. Everything would be lost: my passport, my books, my clothes and camera and computer; even old love letters, tax returns, photographs. But we’d be safe. We’d run through the tall grass on the side of the road until we weren’t breathing smoke anymore. Then some weatherworn trucker would pick us up and drop us in the parking lot of the nearest hotel or gas station with a “Just be happy you got alive, kids,” before he cruised away. It’d be like straight out of an action movie.

With the smoke getting thicker around us, it felt like straight out of an action movie. 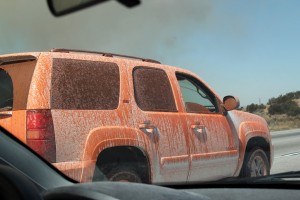 At about that moment, we started to see even more cars driving up the shoulder, on both sides of the road now. If we decided to zip out on the right-hand shoulder to get around the abandoned truck, we’d risk a head-on collision with someone coming from farther down the freeway.  In fact, these cars were definitely from the frontlines because they were covered in bright orange anti-flame retardant, the stuff the helicopter–no, now three helicopters–were dumping on the wildfire all around us.

I looked around, and made an executive decision.

“I’m going to try to turn around,” I said. “We can’t go around that truck and so we have to get on the shoulder on the other side of the road.”

“But you can’t back up the trailer.”

Gripping the wheel hard, I turned on my signal and put the car in drive. Thankfully, we’d waited so long that the traffic had cleared out more: so many people had already pulled their cars around on the shoulder and fled before us that the lanes were more open.

We must have looked panicked, two kids with very out-of-state plates hauling a little U-haul trailer behind us, flushed in terror, because someone let us in immediately. I craaaaaanked the wheel and we held on as I started the turn. And then, at last, I exhaled: we’d made it, a full U-turn across four lanes of freeway, and clunked out onto the shoulder of I-45, heading the wrong way down the freeway. With traffic, much of it splattered in orange, but going the decidedly wrong direction down the road.

“We’re okay! We’re okay!!” we shouted and pumped our fists, like so many action stars before us.

None of this happened, of course. Instead, after we made it off the freeway at last, we pulled out a road atlas and picked out a new route along a nice county road. It seemed like a pleasant enough journey at first, until the mountains starting rising up in front of us in a sheer wall. 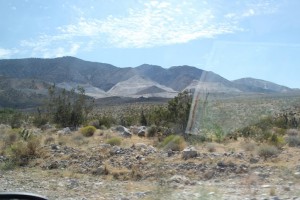 “That’s…that’s not our road, right, Chris?” I said, very aware that the car groaned with effort at even the slightest change in incline.

We kept driving, heading closer and closer to the mountains. 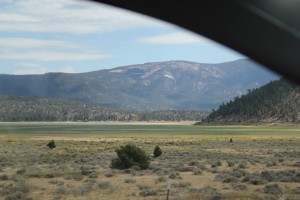 “Wait, wait, wait, hold on. Let me look at this…wait. What are these green dots on the road?” 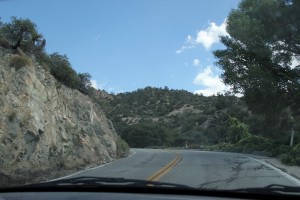 Chris held the map closer, squinting at the tiny roads.

“Well, we’re trying to get through a national forest and I-45 was kinda are only main way, but that way is obviously, um, burning. But there are other roads!”

“So pick another road!” 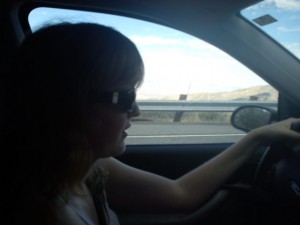 “But here’s the thing: They’re…they’re all scenic routes!” 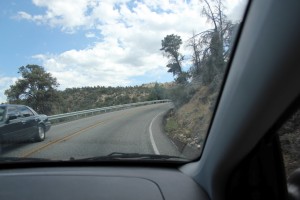 Nearly three hours later, after the car began to bottom out at literally 10 miles per hour, and after an old lady gave us the finger as she passed us in sheer frustration going the wrong way on a blind curve up a mountain, and after I thoroughly sweat through all of my clothes, we made it through the very narrow, very steep and very scenic mountain pass. 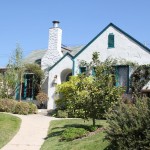 And then, after about an hour of that good old L.A. rush hour traffic, we made it to Los Angeles and my new home,  after a full five days of driving and nearly 2200 miles. We were nearly five hours later than we’d anticipated. Exhausted, we piled out of the car. And as we opened up the Uhaul trailer and began unloading my possessions into my new room, I couldn’t help but think, “Well, no matter what happens, no matter if I make it as a screenwriter here in Hollywood or go home crying and defeated, there is 100% no way L.A. can be as intense as that afternoon.”

And you know what, dear reader? On that, at least, I’ve been right.

To date, EntertainingYourself.com has had visitors from over 100 countries on 6 continents around the world (still nobody from Antarctica – but hope springs eternal). We LOVE it and WELCOME all of you! Thanks for stopping by and ENTERTAINING YOURSELF with us.
Road Trip West: The Grand Canyon (Part 3 of 4)