Today we’re driving to the northern edge of London, to Waltham Abbey in Essex. This town is the home of The Abbey Church of Waltham Holy Cross and St. Lawrence, more commonly known as Waltham Abbey (same as the town – who’d have thought?!). Architecturally, this is an incredible church: the current Norman-style structure dates from the 12th century, and it is believed that there has been a place of worship on this site since the 7th century. Not bad! 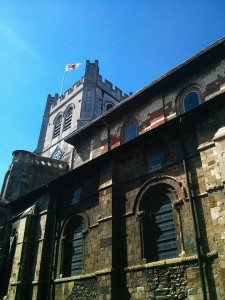 In the UK, Waltham Abbey is best known as the supposed burial place of King Harold II, who helped rebuild the church in the 11th century. King Harold II famously died – perhaps due to an arrow in the eye – in the Battle of Hastings (1066) and may or may not be buried at Waltham Abbey.

Waltham Abbey also carries some significance for classical music enthusiasts, as English Renaissance composer Thomas Tallis served as the Abbey’s organist in the mid-16th century. Indeed, the Abbey’s nave has beautiful acoustics, particularly suited to a capella choral music. But whether or not you care for classical music, Waltham Abbey is worth a visit for its historical significance, beautiful architecture, and stained-glass windows. Even if you’re not religious, standing in the ancient nave may give you chills.

To date, EntertainingYourself.com has had visitors from over 100 countries on 6 continents around the world (still nobody from Antarctica – but hope springs eternal). We LOVE it and WELCOME all of you! Thanks for stopping by and ENTERTAINING YOURSELF with us.
Where Dreams Don’t Fade – Available At Last