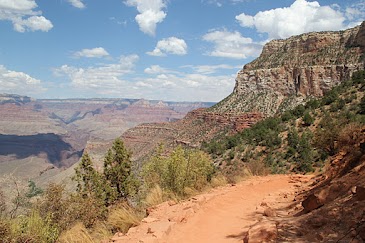 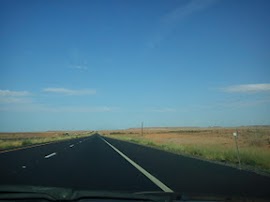 The next day, Day 4 for those counting, Chris and I awoke, sore from our wigwam slumber and hit the road once again. It’s at about this time in a road trip, I think we can all agree, when real life starts to feel like a foreign thing, and all you have is a car, a radio, and, inevitably, an interesting collection of empty fast food containers crammed in various recesses throughout the vehicle. Yep, we were feeling the miles. 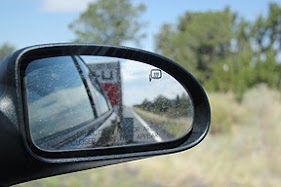 Thankfully, we were just in time for a detour of grand proportions. Now, when Chris and I were originally planning the trip’s route we were all, “Rockies! Rockies!” and my dad was all, “You’re insane and will kill yourselves/the car!” so, as I mentioned before, we chose the southern route. As a compromise of sorts we decided we would take a detour of about 100 miles, give or take, to see the Grand Canyon because, after living abroad for a year, all I wanted was some good old American splendor. And Chris and I, Midwesterners that we are, had never been to the Grand Canyon. And it’ the Grand Canyon, you guys. 100 miles ain’t nothin’ for something that awesome. 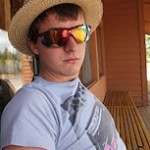 So, over the river and through the woods, to the Canyon we went. When we arrived and hoisted our creaking bodies out of the car, the sun was blistering hot. Armed with sunscreen, sunglasses and some stylish hats, we made our way into the park office. After a few hasty conversations with people giving us impressively mismatched directions (“Isn’t this one of the biggest tourist destinations in the country? Shouldn’t this be more straightforward?” we asked ourselves), we managed to find our way onto a shuttle that would take us into the Grand Canyon National Park. 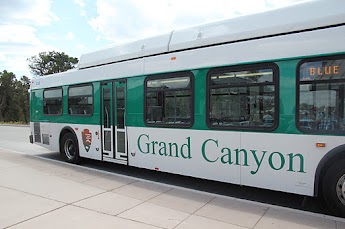 The bus ride was rather pleasant, mostly because we weren’t the ones responsible for driving. I kept craning to see the canyon, but it was shy and kept itself hidden from the road the entire time. In fact, it wasn’t until we were dropped off that I got my very first view of the canyon. We scuttled up a trail and spread out in front of us, stretching as far as we could see in both directions, was the Grand Canyon. 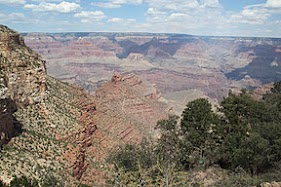 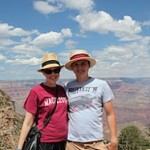 It was utterly breathtaking. For those of you who haven’t seen it, it is truly one of those places that photographs do no justice. In fact, trying to flatten out something so dimensional, so expansive, so rich in color and shadow and texture, seems borderline insulting. Not that I didn’t try. But after a few pictures, including one on my horrible camera phone for the fans back home (“Hi Mom!”), Chris grew a little antsy and so we headed down the trail.

It seemed the deeper and deeper we got in the canyon, the more beautiful it became. I was snapping pictures left and right, some of the canyon itself, but many of us with the canyon: Chris in an arch, me near the edge, Chris gazing out over the canyon; just call me Annie Leibovitz guys, ‘cause it was a regular Vanity Fair cover shoot. 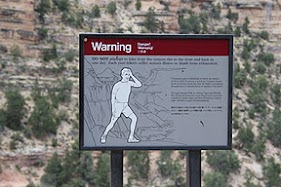 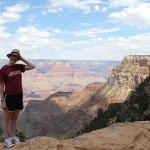 I clicked on and on and–wait a second: Life was (somehow) continuing on the trail beyond our photo-shoot. In fact, the more we tuned in to our fellow National Park trail enthusiasts, the more we realized that everyone seemed to be from out-of-town. And, while we (obviously) were too, everyone around us seemed to be from a bit farther out-of-town…as in, out-of-country. Nearly everyone on the trail around us were speaking various European languages, and striding purposefully up and down the trail. The Americans, large and in charge, were up above on the shuttle buses, breathing heavily behind their digital cameras, while down here, svelte and workin’ it, Europeans were showing us who was boss. Chris and I decided we were done with the photo-shoot—we needed to pick up the pace…for America! We cruised down the trail a handful of miles to our turn-around point, a sturdy-looking outhouse with a water-pump nearby. It seemed to be a popular spot to stop and find some shade, no matter your country of origin.

After a quick bathroom break and a few swigs of water we looked around, glanced at our watches and decided it was probably time to head back up—we still had over 200 miles to drive before our stop for the night in scenic Needles, CA and the road was calling our names. So, up we went. 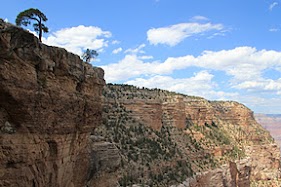 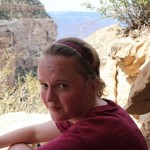 The hike down was easy-peasy, but the hike up, well, it. was. hot. Chris quickly ditched his shirt, and I just as quickly regretted having brought my stupid, heavy digital camera along (call me Annie Leibovitz, guys, but only if she comes with a camera caddy who carries all of her equipment for her). Cheeks blazing red, we strode along, and in a competitive push, passed a group of German tourists and an elderly French couple with walking sticks in one sweep, before collapsing in a heap on the side of the trail.

The Europeans quickly re-passed us.

Yet, after a few moments, or perhaps more than a few, we dusted ourselves off, took a final sip of water, and climbed back up.

The trail winded far more than I recalled it doing as we’d walked down, let’s put it that way. Finally, mercifully, at last I began to recognize some arches and vistas from our descending photo-shoot from what seemed like so long before (It had really only been about 90 minutes). We paused a moment to “take in the view” (ahem, for a breather) but were brought out of our reverie by voices behind us. Was that Italian? Without looking back, we quickly scrambled up the rest of the way to the edge of the canyon before enjoying a lazy, air-conditioned shuttle bus ride back to the car. 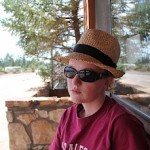 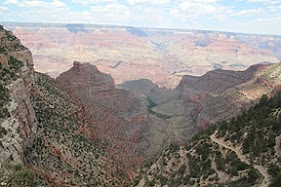 In Defense of the Family Road Trip

To date, EntertainingYourself.com has had visitors from over 100 countries on 6 continents around the world (still nobody from Antarctica – but hope springs eternal). We LOVE it and WELCOME all of you! Thanks for stopping by and ENTERTAINING YOURSELF with us.
Thank-you Cleveland!

Road Trip West: The Wildfire (Part 4 of 4)
Scroll to top