This story was a submission to EntertainingYourself.com’s first ever “Best Running Story in a Foreign Country Writing Contest” – April 2011. Our story’s author, EY Contributor, Martin Mudry, an avid traveler and runner, is currently filming a documentary in Kenya called “Where Dreams Don’t Fade.” You can follow his latest project on a special facebook page devoted to the movie.  Or check back here for more stories to come! 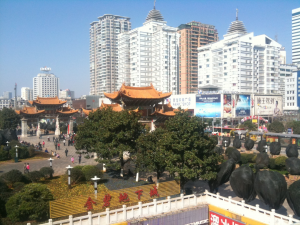 Carl had just arrived in China. Wade, Megan and I picked him up at the airport in Kunming, the city he’d be spending the next 4 months in for his study abroad. While Wade, Megan and I had been traveling around China together for a few weeks, Carl should have been tired, jet lagged, and ready for bed. So what did we do? Immediately upon returning to the hostel we made him take a shot of one of the strongest and foulest drinks known to man called Baijiu. At $.50 for the equivalent of 5 shots, it also must be one of the cheapest drinks available anywhere.

The rest of the first night was pretty tame. We walked around a bit past some empty stores, through the big square where our hostel was located and then went to bed. The next morning we all went out to breakfast together before bidding Wade and Megan goodbye, as they flew back up north to the city where they are both teaching. 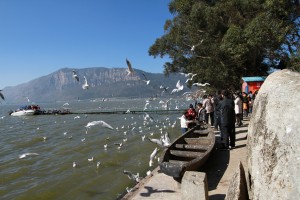 Once they left, Carl had quite a bit on his plate. He had just arrived at altitude, (Kunming’s altitude is 1,800 meters ~6,500ft); he was with someone who has a dairy allergy but doesn’t speak any Chinese; he was adjusting to a 13 hour time difference from where he had just come; oh yeah, and this was his first time traveling outside of the United States, EVER!

So as a good friend, what did I do to ease the transition? Take it easy for a few days? No! Carl and I immediately headed out to the city outskirts and hiked into the nearby mountains where I had previously seen a few hotels. We hiked up to an even higher elevation at which point the real fun began- watching Carl barter for a room with people in Chinese. The problem was, aside from Carl not having practiced Chinese for a few months, he also had to speak to people who barely knew Mandarin- the only dialect he had been taught.

We checked out one place, which seemed nice, but the price was a bit high, so we decided to check out another knowing we could always come back and try to drive the price down more. 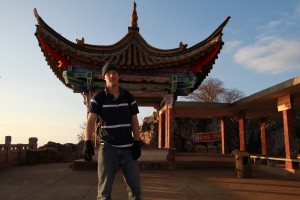 At the second place, the guy showed us rooms but opened each door by sliding open the room window first and then unlocking the door from the inside with his hand. But the price seemed right after a little negotiation, so we made the decision to stay and asked for the room key.

What? The guy didn’t seem to understand. “The key to the room” Carl said again in Chinese. He seemed very confused and reluctant, but took a key off a key chain that appeared to hold only the master keys. We went back to the room, where I took a closer look at the window- thinking: “Great, no lock, so the key is useless per his little trick to get in.”

As I debated whether we should leave our stuff in the room while we went for a run, I realized that there was a key to the bathroom and if we locked our stuff in there, chances were he wouldn’t be able to get past that second door.

So with our passports and cash secured behind one door with virtually no lock and behind another door as flimsy as balsa wood, we went out for a quick walk and then a run.

As we were leaving with our backpacks to explore the area, we ran into the guy who had given us the room and key. He asked us for the keys. Carl tried to tell him that we had it, but he kept asking for it. I, of course, didn’t know what he was saying, although it was pretty clear that he was motioning for the keys. Finally Carl told him for the 4th time that we were just going for a walk; that we would be coming back; and that we were taking the key but would give it back before we checked out.

On the run we went through small villages, down single track trails and came upon some kids. They appeared utterly terrified and I’m sure the youngest thought the foreigners were going to kill her and leave her dead in the forest. We tried to tell them it was OK and the older ones actually start to laugh, but one of the youngest continued to run in terror.

We ducked by some houses and got back out onto a main road. A few more times we took trails that came to dead ends. One looked nice but quickly ended at a small temple in the hillside. Another led us down a path toward a village but soon we were surrounded by huge German shepherds, which while chained, were barking furiously, giving us the clear message about which way to go (back the way we came). We wandered through more fields, before finally coming to a trail that led down a steep path and crossed a beautiful hill of tall grass.

It reminded me a lot of the hills on the coasts of Northern California, with little halftrack trails. Carl was out running in front when all of a sudden he slipped. The image flashed before me of Carl tripping and tumbling a hundred feet down the steep slope. Luckily he caught himself.

Feeling like my mother, I warned him: “Be careful Carl.” “I know” he said. A few minutes later, he tripped again, and then again. I felt at a loss, and could picture having to call his parents to tell them how he slid down a hill in rural china. Again, with a little luck, we found a way up and over and finally were on the path heading back to the hotel.

We planned to go out to eat, but after a shower Carl was exhausted and just wanted to call it an early night. I didn’t blame him. When Wade Megan and I first arrived at altitude, we took it really easy. With Carl, I’d had him hiking, running, and translating from day one and maybe the jet lag was finally catching up with him. I read for a bit then lay down as well and we both dozed off until 9:30 pm or so.

We were both awake and talking when we heard a car pull in and the doors slam. Then, all of a sudden, loud piano music. It sounded so real – could there be a piano somewhere??

Carl and I were like what the ??, until the background music started and people started singing karaoke in Chinese for the next few hours. The music randomly went from loud to unbearable at no discernable intervals.

The absurdity of the situation – high up above Kunming, on the border of mountains and farmland – people were blasting music and singing as if their sole goal was to break glass.

Hours later the music stopped. Then we heard footsteps coming downstairs to where our room was. Then there was someone at the door trying to get in. We tried to say hello, but then the window slid open. I quickly got up to turn on the light as Carl yelled “What do you want?? We’re in here” in Chinese. As I turned on the light, whoever was there left quickly and that was the last we heard of them. 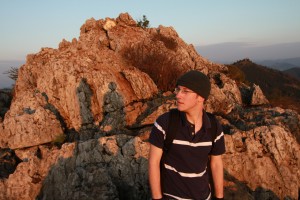 The next morning, we got up early and caught the sunrise on the hill. It was completely quiet and we were the only people. It was a complete 180 from the day I had discovered the place with Wade and Megan.  That day it was New Years and there were hundreds of Chinese people in high heels, suits, and dress shoes, miraculously scrambling over the rocks and shouting to each other across the valleys. This time we were alone and the light was perfect.

We hiked around a little more before returning to our room to gather our stuff to leave. Our friend who was so worried about our keys and maybe was the one trying to come into our room the night prior was no where to be found.  We left the keys with his wife and headed out. 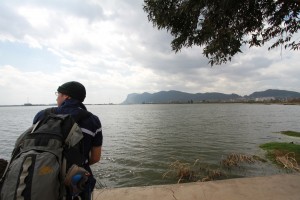 We had 20 miles to hike and many more memories to be had before the day was up.  It may have only been Carl’s first few days in China, but it was important that he learn the rules to successful travel- do it while you can, push yourself, and don’t forget to go for a run.

The View From The Top

To date, EntertainingYourself.com has had visitors from over 100 countries on 6 continents around the world (still nobody from Antarctica – but hope springs eternal). We LOVE it and WELCOME all of you! Thanks for stopping by and ENTERTAINING YOURSELF with us.
The World Really Is Flat