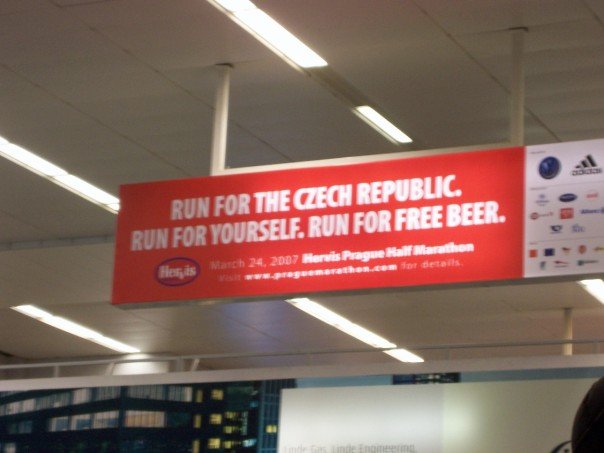 Run for the Czech Republic. Run for Yourself. Run for Free Beer.

As I stepped off the plane in Prague, Czech Republic my buddy Max tapped my shoulder and pointed to a big billboard in the airport terminal. “RUN FOR THE CZECH REPUBLIC. RUN FOR YOURSELF. RUN FOR FREE BEER” it read in all capital letters. “We have to do that!” Max said with a smile on his face. 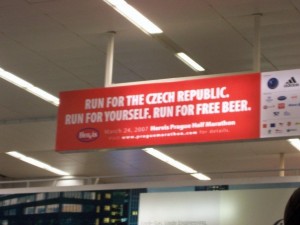 The advertisement was for a half marathon only three days away and it conveniently overlapped with our schedule in Prague. Why not? I thought to myself. If Max, a tubby baseball player from New York City feels confident about this, I can definitely run a half marathon. “What do you think that means when it says ‘run for free beer’?” Max asked. I shrugged in equal confusion. Having never run any more than 5-6 miles, I excitedly agreed, unaware of what we were getting ourselves into.

The following morning after leaving our hostel we ventured into downtown Prague and walked into the blow-up tent to register for the race. With the translation help of a kind Czech teenager we were able to sign up for the race smoothly. We left the tent with a t-shirt, a timer to strap around our ankles, and a number to pin onto our shirts. “Nice we’re actually going to do this!” I said to Max enthusiastically. The next two days we continued with our plans as scheduled, which included touring the magnificent cathedrals, walking down old cobbled streets, and eating kurtos kalacs (a wonderfully delicious Czech pastry).  The night before the race, I ate a big plate of pasta fettuccine as instructed by a friend who advised feasting on carbohydrates.

It was a cold morning in Prague when we woke up, so I wore a long-sleeved shirt and shorts for the run. We meandered over to the start of the race after a light breakfast and congregated by the changing room (which was in fact just a large outdoor tent with some drapes over the side). It was before the race had even begun; yet the stench of body odor could have suffocated a small child. I could not believe the smells of so many men could produce something so pungent. The “bathroom” was a line of urinals in broad daylight offering no privacy. We walked across the street passing one of Prague’s most famous landmarks, the Charles Bridge, and waited for the race to begin. A group of five men (based on our stereotypes, we could only assume were Kenyan) jogged in the middle of the street and the dense crowd parted for them just how I imagined Moses’ parting of the Red Sea.

There was an announcement that the race was starting momentarily and that everyone should get ready behind the start line. Max and I nervously looked at each other secretly hoping the other would flake out to give us an excuse not to actually follow through with this crazy idea. Neither of us wanted to bail so we did our stretches out and took off in a jog once the whistle was blown. Max pushed ahead of me within 5 minutes, and it was the last time I saw him for the whole race. Giant balloons were pinned to the jerseys of trained professionals each running at different time intervals for the benefit of the runners.

After the first few miles I started to get thirsty and saw an upcoming table with a plethora of cups, and I decided it was a good time to hydrate myself. As I approached the table, I scanned all of the cups and noticed they were each filled with a dark brown liquid that was foaming at the top. There is no way this is beer. I thought to myself. I took a sip to quench my thirst and sure enough, it was beer. Is this what it meant when the billboard said “RUN FOR FREE BEER?” Do Czechs actually like beer so much that they drink it during a half marathon? I gulped down the cup, laughing to myself as I kept running. Maybe a particular beer company is sponsoring this table? I didn’t have time to reflect for too long so I kept moving, eager for the next table to give a liquid that could actually hydrate me. Another few miles went by and a new table appeared off in the distance. As I got closer I noticed that once again all the cups were filled with the same brown liquid! Eager to drink something, I gulped down another beer. This happened three more times during the race, as each table continued to hand out beer to the runners, despite my constant hopes for a cool cup of H20.

As the race came to a close, amazed by my ability to have kept up with the red balloon runner indicating the 2-hour half marathon, I counted the number of beers I drank. It was five. In two hours, I drank five beers, all in an effort to guzzle any liquid, and truthfully to optimize on the free beer that was advertised so widely (despite that it likely slowed down my race).  When I eventually met up with Max at the end, we avoided the changing room for fear of what monstrous odor would be coming out of it after the race. We made sure to get our free 30-second massages from two chubby middle-aged Czech women who slapped our legs around (one on each leg) and we laughed at the hilarity of the day. I mocked Max for finishing thirty minutes after me, but in truth we felt accomplished for our victories. When we woke up the next morning, unable to bend our legs, go up stairs, or walk long distances, we were no longer laughing at the hilarity of the previous day.  The joke was on us. The real laughter came three days later when we could freely move again, without keeling over in leg pain.

This story was submitted by Eli Zach Terris.  Eli is currently a graduating senior at Brandeis University in Boston.   He tells EY: “Since I love writing stories, running (and coincidentally am in need of new running shoes!)  I decided to give it a go.  It was fun to relive these stories while writing them.”  This Czech Republic Running Story is one of two stories that Eli submitted.  Czech back – oops – we mean check back to see where else Eli has been.

To date, EntertainingYourself.com has had visitors from over 100 countries on 6 continents around the world (still nobody from Antarctica – but hope springs eternal). We LOVE it and WELCOME all of you! Thanks for stopping by and ENTERTAINING YOURSELF with us.
BEST RUNNING STORY CONTEST WINNER ANNOUNCED!

TIED FOR SECOND PLACE – RUNNING IN KRAKOW
Scroll to top