(This story is a continuation of Part I: London to Inverness ) 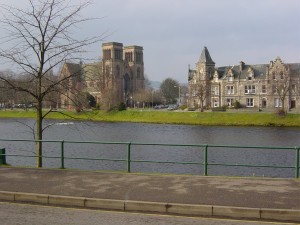 Adventures shouldn’t start without breakfast, but Bijani decided nothing would suit us better than traditional Scottish Breakfast. She chose the Castle Café, which had all Scotch delicacies on order: mutton, blood pudding and of course, haggis—that’s sheep heart, liver and lungs and oats, boiled for hours in the animal’s mid-section. I ordered pancakes.

The waitress treated us very pleasantly, especially after I shook a container of brown liquid onto my pancakes, took a bite and gagged. “That’s not syrup, dear,” she said over her shoulder, “that’s vinegar.” Taking pity on me, she brought over a fresh stack of pancakes.

My genetic inheritance didn’t include an iron stomach, but after some arm twisting I discovered haggis and blood pudding taste more hearty than terrible: the former tastes like meaty Quaker oats, and the latter like dry, slightly metallic burger.  We ate almost everything before leaving. Next stop: neighboring Loch Ness  and Uruqhart Castle, but first an hour of sightseeing.

It seemed a quiet and even solemn Friday. Inverness’ McDonald’s proved a hub of activity, but screeching tires, a horn and a crash from the pedestrian mall thinned the crowd as people ran to investigate. Sounds of backfire and breaking glass gave way to loud music, as though a driver’s hand suddenly switched the car radio to full volume.

Bijani and I joined a now-large assembly, expecting an accident, but saw only an old lady with a bonnet and umbrella, riding a tall two-wheeled shopping cart, her legs dangling from the side. Then there was another. And another. The trio raced around the brick street on their carts, revving unseen engines, honking unseen horns and grooving to a bagpipe-heavy rendition of “Everybody Dance Now.”

A closer inspection revealed these petticoated grannies to be men in drag, riding converted Segways, with fake appendages on the outside, but that only raised more questions. I laughed, until I finally asked Bijani, what was going on?

..Check out the Scottish Ladies on our facebook page..

She had no idea. The guidebook hadn’t mentioned Scottish humor. After a few minutes, we ducked into a dollar store and questioned the cashier about the “ladies.”

“No one knows,” she said. “They just arrived yesterday. Scotland’s a wee bit crazy like that. Some days things just happen.”

(It stayed a mystery until that evening, when a grizzled pub owner responded to my very earnest query: “They’re not serious, ya know… They’re clowns.” He was still laughing when we finished our fish and chips and left.)

Amber birch and reddening ferns lined the road from Inverness to Uruqhart Castle, which skirts the edges of Loch Ness. Long, narrow and pristine, the lake widens briefly before its shore peaks at a tiny cape, dotted by the ruins.

The MacDonald clan, the castle’s last keepers, blew it up because the site proved indefensible and therefore, I imagine, too expensive to maintain. One sympathizes, but the decision must have been difficult because the lake glimmers magnificently, even under the faintest light.

Bijani and I walked down the steps toward the stone towers overlooking the water. Rain alternated between sheets and drizzle, but for a moment the sun broke through the bank of clouds to make a golden pathway on Loch Ness. We clambered through various passageways and chambers, taking occasional shelter, and searching for Nessie. We didn’t spot the monster, however, until we stopped in the small town of Drumnadrochit on the road back to Inverness.

Adventures shouldn’t end without dinner, so Bijani and I returned to Inverness for some affordable and surprisingly good fish and chips, then headed back to the hostel to prepare for our upcoming trip across the Highlands.

…To Be Continued in Part III: Kyle of Lochalsh to Fort William 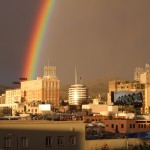 To date, EntertainingYourself.com has had visitors from over 100 countries on 6 continents around the world (still nobody from Antarctica – but hope springs eternal). We LOVE it and WELCOME all of you! Thanks for stopping by and ENTERTAINING YOURSELF with us.
TIED FOR SECOND PLACE – RUNNING IN KRAKOW

Chance Encounters of a Good Kind
Scroll to top