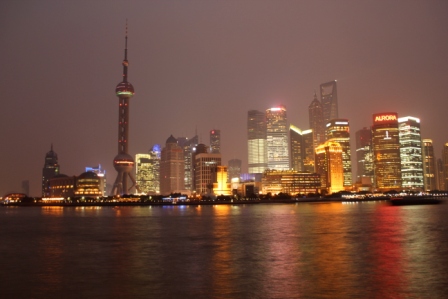 One of the main drags through downtown Shanghai is Nanjing Lu. It’s a crowded pedestrian-only area packed with international stores and locals hawking their wares (and potentially trying to scam you—see #3). It can be overwhelming, to say the least, but is also a good way to get from the People’s Park to the Bund. Once you’ve had your fill, duck off to a side street and discover the real Shanghai. Yes, it’s grittier and dirtier (as an aside, avoid wearing sandals or open-toed shoes while traveling in China, as your feet well get absolutely filthy) but you can get a feel for what it’s really like to live in Shanghai. Plus, the street food is to die for. As long as it’s cooked nice and hot in front of you, you shouldn’t have any problems eating the pan-fresh fried rice or steamed buns (called baozi. They’re delicious.) you’ll find on every corner. Unless you know Chinese, be prepared to point as it’s most likely no one will speak English. On that note, picking up a phrasebook with a good dictionary as an appendix before your trip will definitely be worth it, especially if you’re a picky or particular eater. 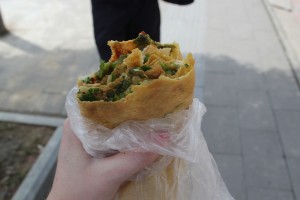 Shanghai is a city that stays up late but gets up early. Morning is another great time to pick up some delicious street food, especially my absolute favorite, the savory large pancakes called jien bing, which the vendor will roll up for you like a burrito. Be sure you don’t miss the early morning markets where you can find locals buying their fruit, vegetables and meat for the day. There will be at least one market in every neighborhood. One quick tip: If you want to pick up some fruit, make sure you can peel it or bring along a peeler to get rid of the skin. Chinese people abide by this rule too, so don’t worry about offending anyone—you’ll horrify them much more if you just bite into that apple, instead of peeling its skin off first.

It often goes like this: You, an excited foreigner in China, stop to snap a few photos along the Bund. Two young, friendly Chinese women come up to you and in pitch-perfect English, ask if they can take a picture with you. Flattered, you say okay. You strike up a conversation. They’re from an inland city, also visiting Shanghai and wow, you’re an American! They love America! And you love China? That’s great! Would you like to go to see a traditional Chinese tea ceremony as we talk about our cultures? Sounds interesting, you say, and away you all go. Then, twenty minutes later, after you’ve tried a few teas, you’re presented with a bill for hundreds upon hundreds of yuan. And that’s when it sets in: You’ve just been scammed. Unfortunately, this happens again and again in any major tourist area of Shanghai and Beijing, and goes virtually unchecked by the government, at least at this time. This means as a visitor, you have to be on your guard, which can make for some unfortunately suspicious interactions with locals. Don’t agree to go anywhere with anyone, no matter how charming they are or how great their English is. If you meet a local you get along with, I’d suggest you pick the place to eat or drink the first time.

Having said all that and as an aside: Shanghai’s violent crime rate is extremely low, especially given the Chinese government’s strict gun restriction laws. Still, it never hurts to use caution, particularly if you’re clearly a foreigner, traveling on your own, as you’ll stick out more in some parts of the city.

4. Be prepared for everything you’ve read on the city to be out-of-date.

Shanghai is constantly changing, and not just in small ways. Restaurants you’ll find reviewed online the year before may be gone. The subway line will suddenly have a half a dozen more stops. Or that museum you were looking forward to from your 2-year old guidebook will have long since closed. It’s part of the feel of the city, but it can get frustrating. One way to combat it is to check on Shanghai’s WikiTravel page before you go out of your way for anything but a major site, as users tend to keep the website up-to-date. Or, when you finally make it to the address of the bike rental shop and it’s now a chocolatier (to use a real-life example), shrug and head on in for a sample; it’s all part of China’s charm.

5. To get to and from the Pudong Airport, take the elevated train.

Called the Maglev, it’ll get you from the airport into the city in fewer than 12 minutes, and is a fun introduction to China’s growing fast train system. It’s a little steep, but worth the money. Yes, the subway’s Line 2 goes all the way out to Pudong these days and rings in at only 2 yuan per ride, but it’s at least a 90-minute journey, which no jet-lagged traveler wants to stomach. Cabs from Pudong into the city can cost over 200 yuan and will take even longer than the Maglev, even if you don’t hit traffic. If you’re concerned about finding your hotel once you’ve made it into the city, grab a cab at the end of line. Just make sure you have the name of your hotel written down in Chinese characters to give to the cab driver (also see #6).

6. Be sure to grab a business card from your hotel.

Any hotel, even smaller ones, should have a business card with their name and address on it both in English and Chinese. Make sure you have a couple of those handy to give to cab drivers. Since virtually no cabbies know English, also have your hotel write down any major locations you want to see that day on a cheat sheet. Otherwise, try out Shanghai’s excellent subway system, but be aware that it shuts down around midnight each night.

7. Check out the Shanghai History Museum.

Located in the base of the famous Oriental Pearl Tower, the Shanghai History Museum is a ton of fun. It’s full of dioramas and mannequins that explain Shanghai’s history from ancient times to now. Plus, the captions provide an interesting, albeit sometimes grammatically clunky, perspective about the Chinese views on western imperialism. Check hours as they may vary, especially on holidays, and lines can get long on weekends. I’d recommend shooting for evenings, as the crowds will thin out after about 6 pm. Plus then you can see the pink Pearl Tower lit up from below as you exit the museum that evening.

8. Set aside at least a few days for brief overnight trips. 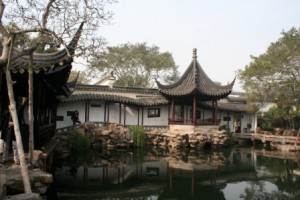 Suzhou's Garden of the Master of Nets

Hangzhou, with its gorgeous West Lake, and Suzhou, with its multiple UNESCO World Heritage Site traditional gardens, are not to be missed. Both are accessible by fast train from Shanghai’s main train station. While they’re easy to get to and not too far from Shanghai, I’d still recommend spending at least one night in each city to be able to get yourself oriented. Both cities suffer from a lack of foreign-accessible transportation (the bus systems are tricky at best to figure out if you don’t read Chinese characters, unlike Shanghai’s subway system). Also, during rush hour, cab drivers, who don’t work for tips in China, will avoid foreigners for an easier native speaker fare, so getting around either city can be a challenge. Still, once you’re sitting in one of the ancient pavilions in Suzhou’s Garden of the Master of Nets or enjoying a cup of longjing tea, the local specialty, at a West Lake teahouse in Hangzhou, you’ll be happy you made the trek.

The View From The Top

To date, EntertainingYourself.com has had visitors from over 100 countries on 6 continents around the world (still nobody from Antarctica – but hope springs eternal). We LOVE it and WELCOME all of you! Thanks for stopping by and ENTERTAINING YOURSELF with us.
I survived Dog Sledding in Mongolia