Blog - Latest News
You are here: Home / Sunny Spot / Asia / The Perfect Temperature or: Cravings in a Foreign Land 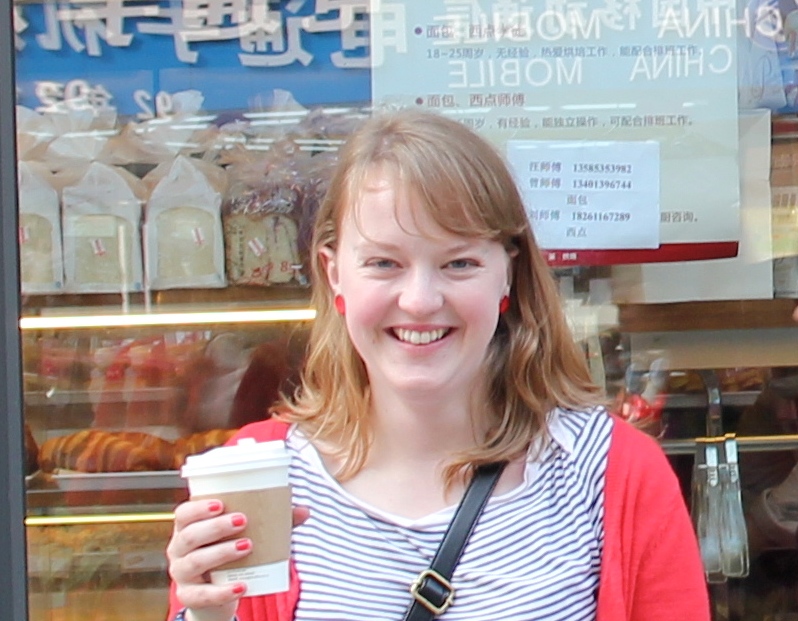 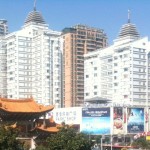 When living in another country, there’s something about food that starts to get to me. I’ve always been one of those unfortunate people who gets cravings for certain foods, like appetite itches that have to be scratched. Once they are, I’m satiated and can move on to the next thing.  I’m ashamed to admit that on more than one occasion I’ve gone to get a burrito or a Dairy Queen Blizzard, ignoring a refrigerator full of post-holiday leftovers and spending Christmas money I should have saved, because I had to have it. I’ve ordered the same thing at restaurants over and over again just to make sure I don’t “waste a time” going there by trying something new—and risk not satisfying my hankering for fettuccine alfredo, say, or black bean soup. I make for an overall boring dining companion, I imagine, but I am a slave to my cravings, and it’s something I’ve attempted to come to terms with as I’ve grown up.

So, when I moved to China last fall to start a teaching contract at a college in Changzhou, a city outside Shanghai, I was excited to try all sorts of new foods, but also a bit wary. Not only am I a craving-driven eater, I’m also a fairly picky eater, especially when it comes to textures. Things can be too dry, too grainy, too crumbly, too gooey, too whatever, and I’m done—the dish is wrecked. I haven’t met too many people who seem to care about the texture of food as much as I do, so it’s with some reservation that I admit this next part.

The food in China, when I first arrived here, was so overwhelmingly wet, so mushy and oozy, compared to what I was used to back in the U.S., that I found it very difficult finding things to eat. I longed for something more “edible,” under my own terms, like a taco or a piece of pizza or a fresh salad.

The cravings multiplied as the weeks went by. My initial pull for Mexican food and pizza was paired with an overpowering need for cereal—any cereal!— and cake—any cake!—divided by an incessant desire for brownies, chocolate bars, chocolate malts, chocolate chocolate chocolate…none of it readily available in Changzhou. I was doomed. I found that food began to consume (pun intended) nearly all my thoughts. I started looking at cooking  websites  online and felt my mouth watering over various dishes that I didn’t have the ingredients to recreate.

Nor the kitchen, for that matter. It’s worth noting that there are no ovens in China, something I wasn’t aware of when I moved here (had I known…well…). The Chinese simply don’t cook with ovens and, as far as I know, never have. All of their food is fried or steamed. In fact, Mandarin Chinese has at least five different words for “to fry” that differentiate between things like the amount of oil you use in the wok and whether or not you’re frying things in sauce. A few gas burners and maybe a microwave is all anyone seems to have in their kitchens here. Oh, and a rice cooker. Always a rice cooker. But never an oven. And therefore no chance for me to satisfy my craving for anything with yeast and sugar in my own apartment.

I knew I had to find other things to eat, beyond fried rice, steamed vegetables and too many containers of yogurt, or suffer the consequences of a crazed food craver. Enter Café 85°C.

Café 85°C is fondly known as “the Starbucks of Taiwan” but I have never seen baked goods like these at any Starbucks I’ve ever wandered into. The place is so named for their self-proclaimed “perfect temperature to serve coffee” (85° Celsius is 185° Fahrenheit, for those Americans in the group who don’t feel like Googling the conversion). The place is one-third coffee shop, and two-thirds bakery. Oh, the bakery.

There are actually many bakeries in China: like cupcake shops in New York, they’re something of a fad here. Low-grade sweetshops peddling Little Debbie-like wares can be found in various places around Changzhou. These bakeries all have cute English names like “Happiness” and “Christine” and “Bread Talk.” The only problem is their baked goods generally taste like greasy Twinkies, hardly worth the calories. Their bread is even worse, dry and ashy, like sawdust was baked into the loaf.  I had all but given up hope on having a delicious baked good here in the Middle Kingdom when my boyfriend and I made our first trip to Shanghai.

We had a week off for China’s National Day in early October, and we’d decided to take the high-speed train from Changzhou into Shanghai, a hair over an hour down the tracks, to explore the city for a few days.

Our first afternoon there, after we’d wandered through the People’s Park in downtown Shanghai for a few hours, we decided we needed an afternoon pick-me-up. I flipped open my guidebook and found a branch of 85°C on the map, only a few blocks from us. I read the description and a few choice words: “inexpensive but high-quality coffee” and, more importantly, “pastries,” caught my eye. Sold! We walked there immediately.

Let’s just start by saying ambiance probably isn’t the place’s strong suit—this isn’t the sort of café to while away an afternoon contemplating Hemingway. While each branch of the café is very clean and brightly lit, with white walls and lightwood throughout, it’s hard to see anything but people and pastries. The place is always packed and noisy, with people hip checking each other out of the way for the latest freshly baked roll.  And these rolls are worth a bit of physical contact. They’re puffy clouds of floury confection bigger than both of your fists, with names like “Mocha Bread” and “French Dark Chocolate Roll.” They’re put out onto shelves in the bakery right from the oven by workers in red-and-white paper hats and vanish into bags before they can fully cool.

In another area are the drinks. There are a number of options, teas, coffee and the like, but you really only need to know one: the Sea Salt Latte. It’s a fairly simple equation: a sweet, creamy latte sprinkled with salt on top. Think a sea salt caramel, but drinkable. Reader, I’m in love, and his name is Sea Salt Latte. They’re unreal. 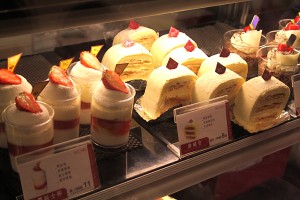 Near the drinks, and not to be ignored, is a large display case with higher end sweets like tiramisu and cheesecake and something called a dark chocolate cherry bomb. I tend to ogle that gorgeous display case without purchasing anything, as delicious at they look, probably because I’m usually a third of the way through my roll by that point, as I stand in line waiting for my coffee to come up at the window.

But going back to Shanghai and that first trip to 85°C. The details, like which rolls we picked and what exactly we drank, have started to fade a bit. Who can say why the mind decides to remember certain things and not others when one gets that first glimpse of beauty and purity in a world of chaos? I do know we fought our way through the crowds to the rolls and pastries in their cases, pulled two out with a pair of tongs, and eventually made it up to the cash register to pay. I know by the time we found a free table in the crowded cafe, I was feeling pretty fried, and so when I bit into that first pastry, perhaps I didn’t fully realize how much my life had changed. But changed it had.

Suddenly, bread was back in the equation. And sugar. Real, honest-to-goodness sugary treats. Were. Back. My luck was on the rise! 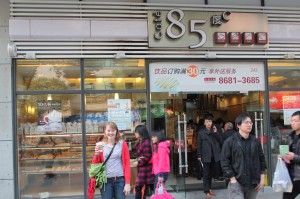 Now, eating at that café (there’s a tiny branch in Changzhou) is like creating cravings I never knew I had. Each time I swing open the door and dive into the crowd, elbowing my way toward my favorite rolls, I feel better. This has been a hard year, living so far from home, and while biting into a mocha roll and sipping a sea salt latte doesn’t make me feel closer to my home in the states, it makes it feel like this place, where I don’t speak the language and don’t know more than a handful of people, could, just maybe, be one version of home for me.

To say I live solely on Café 85°C’s rolls and coffee here in China would be something of an exaggeration. I am now the proud eater of all sorts of Chinese food, and have found many dishes that satisfy both my hunger and my appetite, which (as you may be able to tell by now) can be a tricky combination at times.  But do I go back there more often than I probably should? From this sugar addict to you, dear reader, I’ll admit in my most jittery and buzzed voice, that yes, yes, I do.

To date, EntertainingYourself.com has had visitors from over 100 countries on 6 continents around the world (still nobody from Antarctica – but hope springs eternal). We LOVE it and WELCOME all of you! Thanks for stopping by and ENTERTAINING YOURSELF with us.
Spring Pucker