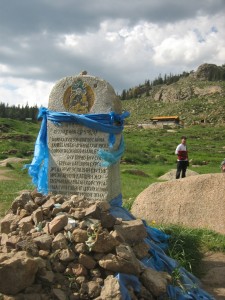 Well there’re just about a million reasons. For starters the world’s second largest landlocked country (Nearby Kazakhstan ranks first) houses geographic diversity that rivals pretty much anywhere. There’s the snow capped mountains and Kazakh eagle hunters to the west; the vast Gobi Desert and great Central Asian Steppe in the south; reindeer herders in the Siberian forests of the north and the grasslands populated by native gazelle or Oryx to the east. Writing this, I’m wondering why I’m not there right now. 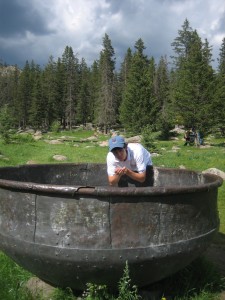 A successful population of the critically endangered Wild Asian or Przewalski’s Horse resides in Mongolia, as does 2-million year old Lake Khovsgul, which itself holds half-a-percent of the world’s potable water. Famed naturalist Roy Chapman Andrews—sometimes credited as the proto-Indiana Jones—discovered dino eggs in the Gobi and Genghis Khan launched an empire that linked Beijing to Baghdad to Babenberg, Austria. With the end of Soviet communism and institution of a capitalist democracy, Mongolia experienced incredible socio-economic change over two decades, but step a mile outside the capital, Ulaanbaatar, and enter a world where the felt tents and herders carry traditions held by the Mongols for millennia. 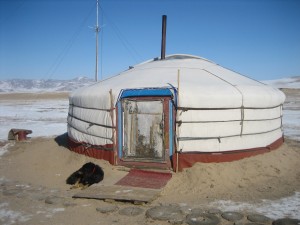 Now that you’re convinced, here are five tips for your trip.

Mark Twain famously said the coldest winter he ever spent was a summer in San Francisco. Frankly, Mark Twain is a liar and moreover he’s never even been to Mongolia. The average temperature in Ulaanbaatar is freezing, meaning when you ask what’s the temperature, at any time of year, it’s quite probably freezing. Ulaanbaatar’s the coldest capital in the world. That means Reykjavík, that city in a land which, from my understanding, is literally made of ice, is warmer. When visiting Mongolia in winter, prepare like you would for a polar expedition: long underwear, solid winter jacket, winter gloves and liners and probably some sort of heat trapping mask. Summer days are warm, but like San Francisco, it can get nippy, especially at night, so bring clothes for hot and cold.

In addition to being one of the planet’s colder nations, Mongolia paradoxically ranks as one of the sunniest spots in the world. It’s generally accepted that the country gets over 250 cloudless days per year without a cloud in the sky, more sun than Yuma, Arizona. So for those afternoons out on the wide-open steppe when it’s just you, the Great Blue Sky, and the really hot, bright sun, UV protection makes the awe-inspiringness of nature less blistery and painful. You can buy some in UB, but selection may be limited, so consider bringing some from home. 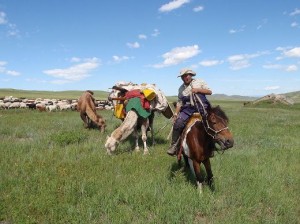 There’s a good chance you will be offered a lot of mutton in Mongolia. “What’s on the menu?” you ask. Well, there’s mutton. Mutton with flour. Mutton with onions. Mutton with a side of mutton. There can be more—Ulaanbaatar has everything from Korean to vegetarian restaurants to fried chicken joints—but outside of the city your options are generally limited, so you may want to accustom the palate to boiled sheep meat. Unusual dairy products like dry curdled sheep milk to fermented horse milk is everywhere, so bring lactase tablets if you have difficulty digesting milk and want to sample the traditional food. Fun fact: Mongolian BBQ is as Mongolian as McDonalds is Scottish. The closest thing to barbecue in Mongolia is Boodog: goat or marmot cooked by placing hot rocks in its stomach. Less fun fact: marmot meat can carry bubonic plague. I recommend the goat. 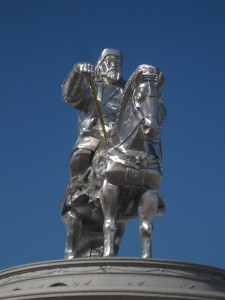 Mongolians have a deserved reputation for hospitality and generosity and while pick pocketing does occur in the capital, it’s generally a pretty safe place. Mongolia is a peaceful democracy that’s managed to maintain good relations with both North Korea and the United States, but the heart of the nation is still ruled with an iron fist by Genghis Khan. In the wrong company, a bad word about national hero Genghis Khan is considered a fighting word. Yes, by some estimates he killed 10 percent of the world’s population in his day, but he was also brilliantly innovative and remarkably tolerant of the freedom of his subjects given the time period. Mongolians view him as a Goergebraham Roosevelt, the embodiment of everything great about the nation, a one-man Mount Rushmore. After being barred from revering their national hero under Soviet rule, the adoration has returned in force. His name appears on everything, from the airport to hair salons, so the temptation to bring him up is everywhere. If you’re at a bar, keep it positive.

Sain Bainuu (hello) and Bayarlaa (thank you) are good to know. Mongolians are very responsive, and sometimes amused, when foreigners speak to them in Mongolian. When you’ve been in town for a bit Zuun, Chigiree, Baruun Tiish, the words for left, straight and right turn respectively, can be very handy for getting around. Street names aren’t commonly used in the country, so directions are often given in a series of turns. For transportation, licensed taxis are rare (although word is this may be improving)  and while nearly every car in the capital is willing to serve as an unofficial cab, they may not know where you’re asking them to go.  Provided you know where you’re going, you can help them. 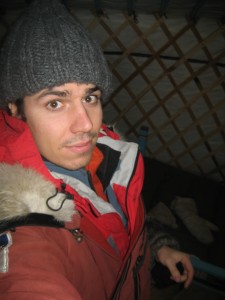 That Ulaanbaatar is a True Nomad? The city changed its locations 29 times before settling in its present day location.”

For more tidbits visit the Official Tourism Website of Mongolia

To date, EntertainingYourself.com has had visitors from over 100 countries on 6 continents around the world (still nobody from Antarctica – but hope springs eternal). We LOVE it and WELCOME all of you! Thanks for stopping by and ENTERTAINING YOURSELF with us.
Crazy – Part 2: Race Day