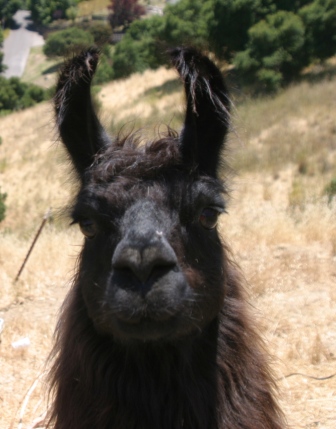 That’s the first thing my mother asked me after learning Jane had a surprise for her. As a messy blond kid my younger sister’s surprises included a humming bird, some snakes and several families of pill bugs, which she relocated to my bed. Steadily, these unexpected gifts grew in size.

Thanks to Jane, now a farm-oriented business lady, we own goats, sheep and hundreds of chickens.

My mother likes a good shock, which must be why our home looks like Old McDonald’s petting zoo. Still, she had some initial reservations.

“I have a feeling it will require a lot of care and will harm me,” she said.

I wanted to ease my mom’s fears, but couldn’t since I knew nothing about llamas. Jane had mentioned getting one, but it seemed she’d considered taking in creatures ranging from Shetland ponies to hippos, so I didn’t take her seriously—until she wrote me the following.

“… also don’t tell mom, but I am buying them a llama, b/c the coyotes have eaten too many of our chickens and I am afraid for the goats.”

When Jane puts something in writing it’s a done deal.

On one level it made sense. Our home is in a rural-ish suburb, just north of the Golden Gate Bridge, but close enough to open space for wild animals to roam comfortably. Coyotes had recently moved in, and we’d spotted them lurking around the goat pen and once my mother saw one bounding through high grass to pounce on an unlucky bird.

A hole  in our fence was plugged with a tree branch, but that was a temporary solution. Jane wanted a more permanent fix for our wily problem, and she argued, what better than a lama? 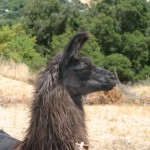 A dog, I guess, but my sister isn’t one for convention. Besides, she said, these South American camelids are badder and bigger than any dog.

That’s what my mom was afraid of: a six-foot wooly beast that needs its “fighting teeth” removed to prevent ear ripping and genital biting (mostly of other llamas) according to the care manual.

If there’s danger, Jane said, “The goats and chickens know to get behind them.” As for the coyote, she said, “it gets trampled.”

A few days after the email, a truck pulling a large trailer drove up to the house and a woman from a dusty llama and schnauzer farm (the owners raised the llamas for pleasure, the dogs for profit) led the latest member of our menagerie to his new home.

From a distance Maurice, or Banjo as we sometimes call him, looks terrifying and ridiculous. His ears arch like devil horns, his eyes look slanted and red. 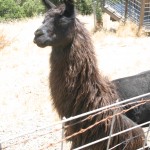 He’s been shaved around his mid section, so that only his neck and legs are covered in dark brown, ocher-highlighted curls of wool—like a French poodle demon.

On closer inspection, however, he appears much less imposing. Maurice is about my height—with maybe 100 pounds on me—but while he’s big enough to ride he’s shy. His face looks like a cute wooly camel and his deceptive eyes are actually large and black orbs. He spent the first few days in his new home whimpering. 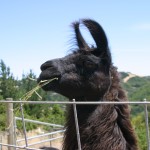 With lama pellets, we’ve slowly begun to gain this big softy’s trust, and he’s kept up his end of the bargain—there hasn’t been a single coyote sighting since he showed up.

Yesterday, after my mom had finished corralling the animals and feeding them, I asked what she thought of Jane’s latest present.

Now I’m wondering if I should tell her about the Indian runner ducks my uncle ordered her this summer, as a surprise of course.

To date, EntertainingYourself.com has had visitors from over 100 countries on 6 continents around the world (still nobody from Antarctica – but hope springs eternal). We LOVE it and WELCOME all of you! Thanks for stopping by and ENTERTAINING YOURSELF with us.
Rosy Outlook: Blue Skies

Give It A Rest
Scroll to top