Blog - Latest News
You are here: Home / Fordafunofit / Animals / The Zone and the Art of Goat Milking 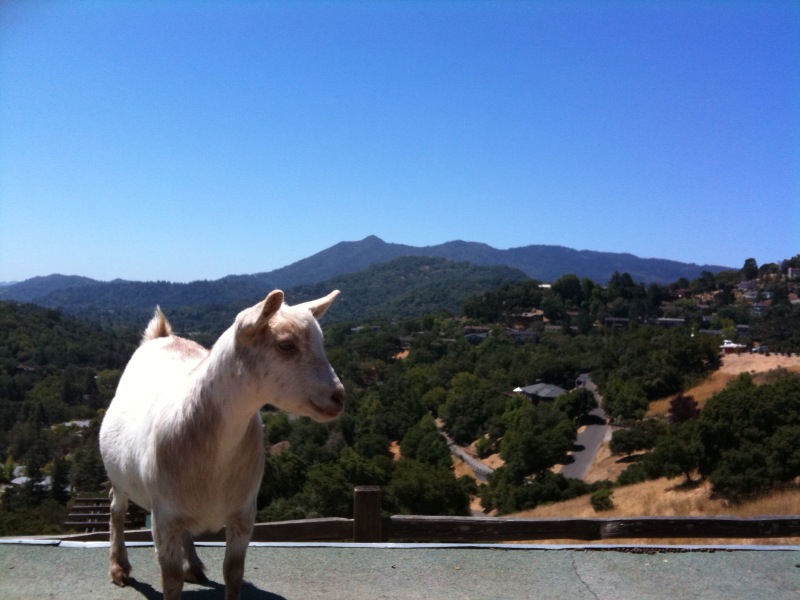 It took sweat, tears and getting peed on, but this month I learned how to milk a goat. It wouldn’t have been possible without a lesson I learned at eight years old inside a dim elementary school gymnasium, when I first experienced “the zone.” I’m sure you’re familiar with it—that mindset that transports you to a state of potent, yet effortless focus.

I was toeing the free throw line to practice shooting, growing increasingly frustrated by a series of misses. Everything distracted me: the old building’s echo; dust particles in the light; my dad’s firm reassurances.

After one particularly bad miss, he stopped me.

We walked outside to a tanbark playground and sat, looking at the dry hills for awhile. My dad asked if I was excited about the house we were moving into.

“Did you explore with your sister?”

“Around the house a little. The neighbor girl played tag with us.”

“It’s a good place for sports” he said. “Maybe we’ll build a basketball hoop there.”

“I think I want to be a baseball player.”

My dad laughed. “Come on. Let’s give it one more try.” He slapped my shoulder. I was feeling pretty good.

Inside, I stepped to the free-throw line once more, took three deep breaths, bent my knees and made my first shot. And my next one. Then I couldn’t miss. It was better than that; it was like the ball couldn’t even touch the rim. The walls reverberated with swoosh after satisfying swoosh.

The next shot went up, way wide. That was lesson number two about the zone—when you’ve got it, don’t think about it.

Over the next 17 years my family and an assortment of pets grew into our house, and I had plenty of opportunities to get into the zone. It helped me pull weeds in the garden; helped replant the flowers I mistakenly yanked, and helped me shoot baskets in the backyard. It also came in handy when I came home from college one summer and constructed a goat pen for some new residents.

I can rarely recall needing it more, however, than earlier this month when my parents left for a summer weekend in Yosemite and I had to milk a goat for the first time. And not just any goat. Milky. So named by my sister for her whitish complexion, though she could have also been called “Kicky,” or “Obstinance” or “Stumpy” for a variety of her other traits.

“There’s no way that’s a goat,” my mom told my sister when she brought the scrappy looking creature home, believing for months it was a pig, and eventually a sheep.

But Milky proved her genetics when she gave birth to three very cute baby goats last month. To keep the milk flowing and our fridge stocked after the kids were weaned, my mom and dad went out every morning to milk her, until it was just me home alone.

My practice run the day before my parents departure ended very badly. I squeezed, Milky’s udder and nothing came out. I squeezed harder and she had bucked and rocked. I squeezed one more time and she peed on my hand.

“She’s never done that before,” said my Mom.

My parents finished the job while I cleaned my hands off, thinking about the mess I would be in the next day. I returned to watch the last stages, and hopefully pick up a few tips from my mom. Milking a goat is not a difficult process. You gentle push the udder to guide the milk into one of the teets, clamp it with thumb and forefinger so the liquid doesn’t retract, and gradually squeeze down with your middle and ring fingers to push the milk out.

If you’re bad at this, it produces a meager drizzle of milk. If you are good, it’s more of a stream that hits the milking pan in a satisfying shower. For the experienced milker, it’s a 10 minute job; for the inexperienced one, it’s half-an-hour plus.

Probably the real challenge is getting the goat to cooperate, and handling the assorted goaty smells.

Before my mom left, she gave me some good advice.

“You’ve just got to get in the zone,” she said.

The zone. Of course. But easier said than done.

The next day I should’ve done the milking at sunrise, but overslept and had to go to my sister’s house to help her build a fence. When I next looked at my watch, it was 5:35 p.m.  and I’d left Milky with a near bursting udder for an entire day.

She let me know about it when I finally got home with a bleating that started strong but faded to a whimper. I lured her onto the milk stand with some grain and fastened her in. I don’t know the exact consequences of not milking goats at the right time, but the way she wavered uncomfortably on her perch, it looked bad. As I started, the more she stomped and kicked, the more I started to feel the pressure. If I didn’t pull it together, my situation and that of the animal I was supposed to be helping, was bound to get worse.

But the goat did not seem to be in a cooperative mood. With each squeeze of her udders only a few drips of white fluid came out. My arms and wrists grew tired. A goat of her size typically yields three cups of milk; my efforts had produced a quarter teaspoon.

I stopped for a break and went to cut some rose branches.

I put her favorite food in front of her and took three deep breaths, then started again. The milk came out a little faster, the strain on my arms was less severe and then the sound of the milk hitting the pail became hypnotic.  And there I was—in the zone.

I squeezed Milky’s udder once more and nothing came out, this time because the bag was empty. Milky seemed content as she walked back to her pen and I returned to the house to strain the milk and have some with a bowl of cereal.

Really though, I’m not taking anything for granted. They’re headed out of town in a few days and I’m prepping for another visit to the milking stand and the zone.

postscript:  Time has passed and Will is now a “semi” pro at milking Milky – look for the long video version of “How to Milk a Goat” under EntertainingYourself – Hip Hobbies. It’s sure to entertain – at least for a bit!

The Key To Sea Kayaking - Part 2

To date, EntertainingYourself.com has had visitors from over 100 countries on 6 continents around the world (still nobody from Antarctica – but hope springs eternal). We LOVE it and WELCOME all of you! Thanks for stopping by and ENTERTAINING YOURSELF with us.
How To Milk A Goat

The View From The Top
Scroll to top