You are here: Home / Sweet 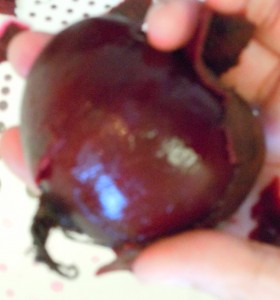 We are all guilty of over-extending ourselves at times, but just because you’re busy doesn’t mean you shouldn’t eat healthily. Some of the best “on the go” snacks are high in nutrients. For someone like me that loves fresh fruit, smoothies are the perfect snack to grab on my way out the door.

Prep time for smoothies is pretty minimal (5 minutes tops!) You can use a blender or food processor to combine all of your ingredients together into one delicious drink.

For my smoothie, I used: 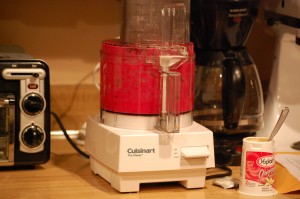 This makes 1-2 servings depending on the size of your glass. To be honest, I was shocked at how good it tasted. I coaxed my grandma into trying it too and she loved it! 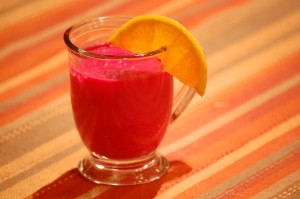 You can use any combination of the ingredients above and you can substitute a non-dairy product or even ice cubes for the yogurt.   Smoothies are forgiving and can be tweaked until they taste just right. The beets not only add a bright pop of color, but a surprisingly satisfying sweetness.  What a great way to start or end your day! 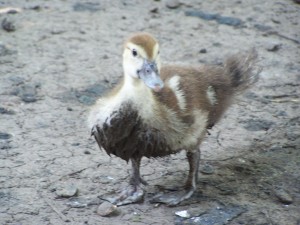 It’s that funny month of March again where mornings are Winter and afternoons already Spring.  All batty-eyed and full of expectation, the sun – as the lark – rises earlier each morning. (So do I, by the way, though fumblingly and with decidedly less grace and panache.)   I wear my rain boots and winter coat every day – another marker of early March. Were I living in a big city where people go all ‘tall, dark and handsome’ for quirky fashions, I might get a few silent nods of approval, but here I think people are just wondering why I left my Power Ranger lunchbox and protection-tipped plastic umbrella at home. But, as previously mentioned, those high-heels make up for most of my fashion missteps in Ukraine.  So, rain boots and winter coat it is. The overnight chill leaves the road that stretches from my house to school icy until midday when the mud and green and chirp of birds reappear, reminding me that I’ve made it through the cruel months of Winter once again…

I turned onto my street just a few minutes ago satisfied that I’d managed to get off my butt and go for a run.  It rained yesterday and the road is rough and muddy terrain but, as always, quite worth it.  I saw the usual – a few kids playing by the side of the road, nibbling at the grass and following a Billy goat up and down the sidewalk and those spotted cows with horns just going about their early springtime business.

Things have quite suddenly become deathly green here.  Every tree branch hangs heavy over the sidewalk. Little streets that I walk down every day to get to school are nearly unrecognizable the growth has been so great. How this place has changed so quickly. It is beautiful and doing everything in its power to contend with the image of dark, gray Soviet concrete that seems permanently plastered in my mind.

The milder weather, though, has done little to change the dressing habits of Ukraine’s youngest generation.

Ukrainian kids are, as a rule, overdressed in Spring and Fall. The fear of catching a chill is ubiquitous and no thermometer could convince the guardians of these little stuffed starfish to let them shed even a single layer. I see one such munchkin a few hundred feet away from my front gate.  He’s standing alone, playing in a pile of sand (undoubtedly meant for some other purpose) and baking in the midday rays.  He’s bundled up like a rolled cigar; tight little layers, each adding to his girth and internal temperature.  He has a wool hat pulled down over his ears, corduroy pants (wide wales) and little yellow shoes.  The little shoes remind me of the twelve ducklings that are living in our yard.  Small gray mud stains spot the front half of each duckling.  Nearly identical spots are splattered on my neighbor boy’s shoes.  It is nothing like Pollock but it ain’t half bad.

Usually, as I walk by most kids just stare unabashedly at me until I pass.  I greet them with some inevitably accented salutation and they only gawk greater.  This little guy, however, pays me no mind.  He’s busy practicing.  I hear him before I get a good look at what he’s doing.  It sounds something like a kitchen parrot trying to get the attention of a recently arrived house guest.  Or a first grader who’s just discovered the musical instrument created after the loss of her two front teeth.

It’s the overgrowth that prevents me from seeing him right away. Unaccustomed as I am to the sounds of farm animals, I briefly consider whether or not this noise could be some other species of turkey with whom I have yet to make an acquaintance.

But no – I turn the corner and confirm – it is a little boy.

And the best kind of little boy I know – all bundled up like a late-blooming butterfly. So darling is he that for a moment, I don’t begrudge his mother for keeping him wrapped up for as long as possible in the polyester-silken safety of his chrysalis snowsuit.

The little boy stands beside his own gaggle of ducklings. He stares at them – he in his spotted yellow shoes and they in their spotted yellow down.  He puckers his lips and – loud like Gabriel – kisses the air in their direction.  It sounds like he’s participating in a candy-sucking contest – trying his damndest to finish the hard lemony rock in his mouth before the next kid.  He stares over at the fuzzy, yellow animals and then, again, sucks in his lips and smacks.  He’s improving – slow, sloppy kisses become quick, sharp ones.  And soon it seems as though he is conducting them all with his two little, puckered and pink lips.

He’s got it right – this little cigar of a Don Juan; he’s gotten right down to the business of spilling his affection out onto these first evidences of life alive again.  The objects of his love declarations are frenetic with excitement and a little muddy, too. The ducklings peep and squeak in response. I vow to be more pleasant in the mornings and enjoy the icy walk to school. I promise to take advantage of the sunshine and launder my clothes more often. I will finish that book and spend more time outside. I also consider taking up Astronomy.  I resolve to be a better American.

Some orchestra, I marvel. 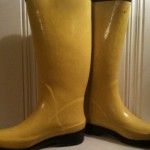 I know it’s early yet, but I do think it’ll be a good one.  Not just because the snowdrops will start growing and the marshrutka trips will be faster and less jostling.  Or even because I’ll get to see my friends and wear more dresses.  But because it just aught to be.  After all, what manner of thing could deign to be dismal when it starts out with such an act?