You are here: Home / hobbies

Just over a year ago one of my younger sisters did two things that surprised me. One: she got married. Two: she bought a pair of goats. At 21 I wasn’t sure Jane was ready to start her own family, much less a herd, but then, she’d surprised me before.

Still, goats? People actually raise them outside commercial farms? The answer, in Northern California where I live and indeed many other places in the US, is yes. After spending some time with these curious creatures, it’s easy to see why. For one, as my sister says, “they’re just so cute.”

When brought up on a small family or “hobby” farm, goats assume many characteristics of a family dog. They love running around (you can walk them on a leash); they enjoy human company; and they’re perfectly content just to hang out with you while you read a book. The breed Jane picked, Nigerian Dwarves, even look like larger dachshunds, only with broader muzzles and perky ears.

Of course goats don’t bark or fetch, and they have their own peculiar quirks. It’s widely rumored, for example, that goats, given the slightest opportunity, will eat anything, especially your clothing—that’s not exactly true. They certainly do like to nibble (their mouth being a primary means of gathering information about the world around them), so if you’re wearing loose garments or if you have shoelaces, they have difficulty keeping themselves from taking a nip. Don’t worry though, goats only have a bottom row of teeth, meaning they can’t really cause any damage, unless your clothes are made of leaves.

It’s also widely reported that goats are great climbers, which is something I can confirm. I’ve seen kids (baby goats) less than a week old dance over hay bales, wood piles, and rocks that even the most intrepid six-year old humans wouldn’t tackle. For goats, it’s all about flair, as they buck, turn and spin while leaping through the air.

Life with these animals is not without challenges, however, and my sister did extensive research into proper goat grooming, what makes an ideal environment and techniques for raising them. Perhaps their greatest needs are a space to roam around, and a place to turn in for the night. To build a goat pen at my parents’ house, my father conscripted Jane’s husband, Ben, into a kind of modern-day bride service. It was hard work, but after several weeks of sawing, hammering and digging, my sister’s goats had a home on par with many New York City studio apartments, albeit situated in one of the more rural parts of a San Francisco suburb.

This manger made it possible for Jane to purchase a soon-to-be mother goat, as it would now have a safe place for its young. When new kids were born, to accustom them to humans, we began bottle feeding them after a week or so. There’s not too much more adorable than a tiny goat wagging its tail as it drinks a bottle of milk from your lap, something my mother, who we’ve nicknamed the goat whisperer, does remarkably well. These days, it’s not unusual for us to be eating dinner, with a goat neatly folded in my mother’s lap, quietly observing the goings on at the family table. 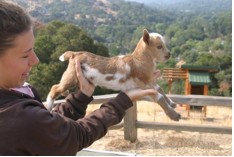 My sister’s family herd has expanded to include about 20 goats and two shepherding dogs, some of whom live with her and her husband at a farm-house fixer upper they rent, some who remain at my parents’ house. In the end, the real surprise wasn’t that Jane was ready to start her own life, but rather how pleasant, and well, normal living with goats seems now, and how hard it is to imagine a day here without them.

“It’s made out of old tennis shoes?” The look on most kids’ faces was priceless. And I admit that when offered a skateboard to “try some tricks” the surface began looking awful hard for shoe rubber… But it’s true, Nike teamed up with Paul Rodriguez (aka P-Rod) and the LA84 Foundation to build a new kind of skate park, made out of recycled materials including old shoes.

The vibe at the event was awesome. I showed up over two hours before the grand opening and there were already over 200 skaters as young as age 5 skating around. Before the park was officially unveiled, skaters killed time by meeting new people, doing tricks for their friends, or waiting in line to be one of the first to get P-Rod and the rest of the Nike Skateboard Team’s autographs (some came over 5 hours early just to be first!).

The event took place on “go ride a skate board” and which happens to fall on father’s day. Fittingly, the event officially kicked off with a humorous speech by P-Rod’s father Paul Rodriguez Sr. As he switched off between English and Spanish for the widely Latino/a community, Paul shared stories of his son growing up in the nearby neighborhood and what it was like watching his son become a professional skate boarder.

When the park was finally opened for skating, literally hundreds of kids rushed the park to say hi to P-Rod and ride the new ramps, stairs and rails. Order was maintained through sheer awe as the pro riders started doing huge tricks over the stair gap.Some riders watched, while others ventured to different areas of the large park to create their own skate sessions for family and community members to watch. Seeing all the young skaters that came out to this event made me realize how important places like this are for kids. This park in particular was created to look and act like real street skate spots rather than a cage filled with ramps. While older and hardcore skaters will continue to seek additional street spots, for younger and new skaters this place offers a legal and safe place to practice and hang out, which ultimately will attract and keep more youth in the sport.